The oil of Argan, potentised to maximise the lipophilic content for Anti-aging, Anti-irritant, Anti-oxidant/radical scavenging properties with a moisturising and protective core, to help prevent moisture loss from the skin and linings of the nose, lungs and digestive system.

Triterpenoids, found in the unsaponifiable fraction of Argan oil are also biologically active substances. The main ones are tirucallol, beta-amyrin, butyrospermol, and lupeol which are cicatrising, skin protecting, sun protective and disinfecting. 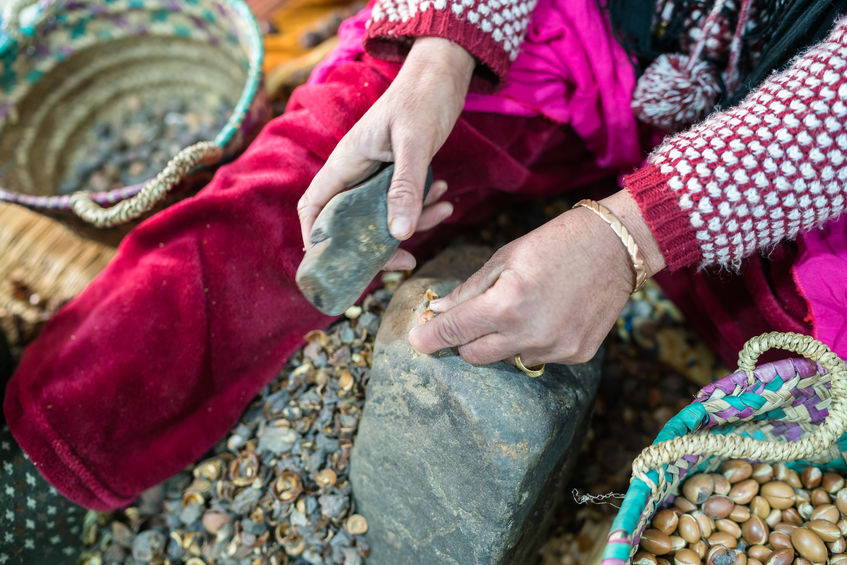 Moroccans have been using Argan oil as a skin moisturiser and hair conditioner since ancient times. Phoenicians in as early as 1550 B.C. have recorded the use of Argan Oil by locals to heal and beautify their bodies.

In the 13th Cenury, Ibn Al Baytar, a Muslim botanist, scientist, pharmacist and physician described the tree in his botanical studies.

In 1510 African explorer Leo Africanus came across the Argan Oil when he was traveling across Morocco. From there, the oil entered Europe where only the rich and wealthy class had access to this expensive, rare and exotic oil.

Due to the extraordinary characteristics it is considered to be one of Morocco's miraculous resources and is known locally by the Berber people, as the Tree of Life because it helps make life possible for many creatures in the semi-arid desert of South Morocco.

Traditionally the oils was used as a protective agent in diseases of the liver and blood circulation, such as high chloesterol and arteriosclerosis. The essential Fatty acids help to prevent loss of moisture from the skin, and linings of the nose, lungs and digestive system, and brai

Products to Use Argan Extract in

Argan Extract is ideally suited to use in skincare products, especially oils, serums and creams. Argan oil tames frizz and adds strength to hair and therefore is suitable for hair use and preparations for Hair Straighteners. Argan Extract can often be found in sun protection creams and soothing creams.

How to Use Argan Extract

The extract can be added to creams, lotions, foaming products (skin and hair) either as part of the production process of your own cosmetics or by adding to the Naturallythinking range of Cosmetic bases.

The extract should be used between 0% and 5%

Argan fruits used for our Argan Extract are mainly wild collected in Morocco. The oil is obtained by cold pressing of the seeds and following filtration. The argan oil is prepared in a mixture of water, propylene glycol, solubilizer and preservatives and clear filtrated after an individual ripening time.

Argan Extract should not be applied undiluted to the skin keep away from children do not take internally seek advice when using on children/infants *do not exceed safe dosage levels unless qualified, always observe country specific regulations. if in doubt consult a qualified practitioner before using.

Moroccon women have been using Argan for centuries as a skincare product, preventing the skin from drying out

Argan Extract The SDS can be downloaded by Clicking Here

Argan Extract The TDS can be downloaded by Clicking Here